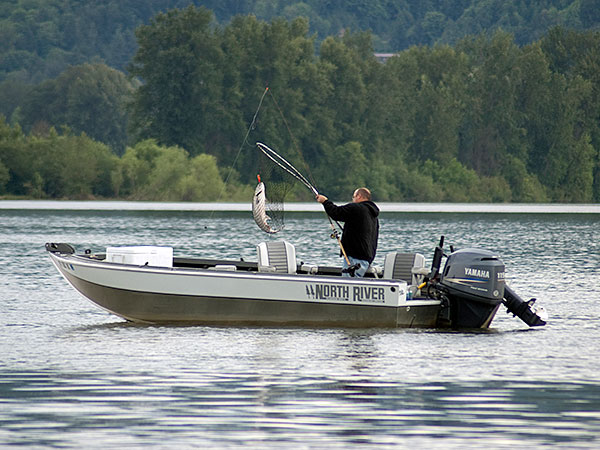 The recreational springer season on the Columbia River from the mouth upstream to Bonneville Dam is scheduled to be open from March 1 – April 6, with boat angling restricted to below Beacon Rock.

The Columbia River spring Chinook season is based on a forecast of 227,900 returning spring Chinook, which includes an expected 160,400 upriver fish. The prediction is down from last year’s return of 274,700 springers and is 80 percent of the 10-year average return of 285,900 fish.

From Bonneville Dam to the OR/WA border upstream of McNary Dam, state fishery managers approved a Chinook retention season starting on March 16 and continuing through May 5

On the Willamette River, the spring Chinook forecast is 38,100 adult fish, which is down from last year’s actual return of 47,200 springers and two-thirds of the 10-year average return of 57,600. The 2017 return allows for a harvest of 9,550 hatchery Chinook between Willamette Falls and the mouth of the Columbia River.

The following is a summary of spring recreational fishing seasons approved by the states:

From March 1 through April 6, boat fishing will be allowed seven days a week from Buoy 10 at the Columbia River mouth upstream to Beacon Rock, which is located approximately four miles below Bonneville Dam. Bank fishing will be allowed during the same timeframe from Buoy 10 upstream to the fishing deadline at Bonneville Dam. The recreational fishery below Bonneville will be managed prior to a run update based on the available guideline of 6,905 upriver spring Chinook. The season may be shortened or extended depending on actual catch and effort.

The states also adopted a no-fishing sanctuary around the mouth of the Lewis River to protect spring Chinook returning to that Washington tributary. No fishing is allowed within the closure area, which is defined as: A line from a marker on the lower end of Bachelor Island through USCG buoy Red #4 to the Oregon shore, downstream to a line from the lower (north) end of Sauvie Island across the Columbia River to the downstream range marker (0.7 miles downstream of the Lewis River) and continuing along the wing jetty to the Washington shore.

Columbia River from Bonneville Dam to the Oregon/Washington border
Prior to March 16, permanent rules for Chinook salmon, as outlined in the 2017 Oregon Sport Fishing Regulations, remain in effect.

Effective March 16 through May 5, this area will be open to retention of adipose fin-clipped Chinook. Fishing for salmon and steelhead from a boat between Bonneville Dam and the Tower Island power lines, approximately six miles downstream from The Dalles Dam, is prohibited.

This fishery will be managed to the available harvest guideline of 921 upriver spring Chinook and may be shortened or extended depending on catch and effort.

Select Areas
Except as noted below, permanent fishing regulations for recreational harvest in Oregon waters within Youngs Bay and Blind Slough/Knappa Slough are listed in the 2017 Oregon Sport Fishing Regulations.

Based on today’s action, effective March 1 through June 15, 2017 on days when the mainstem below Bonneville Dam is open to recreational Chinook harvest, the daily adult salmon/steelhead bag limit in Select Area fishing sites will be the same as mainstem Columbia bag limits. On days the mainstem Columbia is closed to Chinook retention, the permanent bag limits for Select Areas will apply.

STEELHEAD AND SHAD
Permanent rules for steelhead and shad are in effect, except for the following modifications:
Effective March 16 - May 15, 2017, the Columbia River will be open for retention of adipose fin-clipped steelhead from Buoy 10 to the Highway 395 Bridge and shad from Buoy 10 to Bonneville Dam ONLY during days and in areas open for retention of adipose fin-clipped spring Chinook. Beginning May 16 permanent rules resume as listed in the 2017 Oregon Sport Fishing Regulations.

SMELT
A limited recreational smelt fishery may be considered for the Sandy River in 2017 but due to sporadic nature of Eulachon returns and the difficulty predicting their arrival date, ODFW does not intend to propose the 2017 regulations unless circumstances are warranted. Under Oregon’s 2017 sport fishing regulations, smelt-dippers will be required to have a fishing license for the first time this year.

STURGEON
The retention of sturgeon remains open in the mainstem Columbia River from Bonneville Dam upstream to McNary Dam, including adjacent tributaries. Staff is monitoring harvest and will announce closure dates when pool-specific harvest guidelines are met.

2-23-2017
Applications are currently being accepted for one Landowner Representative opening on the statewide Access and Habitat Board. The South Willamette,...... Read More

2-22-2017
Winter steelhead fishing continues And this may be a great weekend to hit the water. After days (weeks?) of persistent high,...... Read More