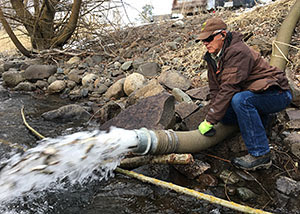 Many of the 1.75 million juvenile fish evacuated from Cascade Hatchery in Cascade Locks after last year’s Eagle Creek Fire in the Gorge are now on their way from the Pacific Northwest’s rivers to the Columbia River and eventually, the Pacific Ocean.

The evacuation was due to the threat of debris flow when storms passed over areas hit by the Eagle Creek Fire. A debris flow could overwhelm water intake areas and harm water quality, which could have killed fish at the hatchery.

One million juvenile (< 1 year old) coho bound for the Lostine and Umatilla Rivers were evacuated to Leaburg Hatchery last September. Half of those fish were released in the Lostine River in northeast Oregon last week, a project in cooperation with the Nez Perce Tribe. The remaining 500,000 coho, destined for release in the Umatilla River in a few weeks, are now at acclimation ponds at the Pendleton acclimation site under the care of the Confederated Tribes of the Umatilla Indian Reservation. Another 650,000 coho went to Leavenworth and Willard National Fish Hatcheries for release into the upper tributaries of the Columbia River including the Methow and Wenatchee Rivers.

An additional 132,000 spring Chinook that were evacuated last September went to Sandy Hatchery are set for a spring release into the Bull Run River, a tributary of the Sandy River.

Operations at Cascade Hatchery are slowly getting back to normal. The hatchery did experience some high water and runoff last fall and some sudden muddy and turbid water flows this year, but water supply has been good overall. Some fish fry are now being raised there and next year, some older fish will return to the hatchery. However, it will be some time before Cascade Hatchery is back to full production due to concerns about the stability of the Eagle Creek drainage.

ODFW intends to use Leaburg Hatchery again this summer to raise 500K juvenile coho that will be released into the Umatilla River in 2019—fish that normally would have been raised at Cascade Hatchery.

“Our ability to move these fish to Leaburg Hatchery was critical to salvaging production after the fires, and we will need to use the hatchery again while the watershed recovers from the Eagle Creek Fire,” explained Andrew Gibbs, ODFW acting east region hatchery manager.

Leaburg Hatchery had been scheduled to close on June 30, 2018 after the U.S. Army Corps of Engineers opted to shift its fish production to a private facility. The Oregon State Legislature recently passed a bill to fund the hatchery for one year (July 1, 2018- June 30, 2019) through a combination of General Fund dollars and Columbia River Basin Endorsement funds.

ODFW is currently working on strategies to provide funding for Leaburg Hatchery for the 2019-2021 biennium and beyond. Continued operation of Leaburg will provide additional capacity within the hatchery system to accommodate emergency fish transfers like occurred after the Eagle Creek Fire. ODFW also hopes that long term funding for Leaburg will allow the hatchery to raise spring Chinook and trophy trout, creating more fishing opportunities in the Willamette Valley. 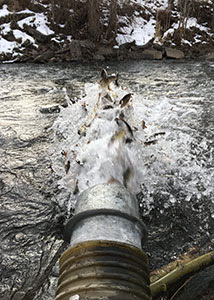 Coho evacuated from Cascade to Leaburg Hatchery after the Eagle Creek Fire last September were released into the Lostine River in northeast Oregon last week. Photo by Jeff Yanke, ODFW.