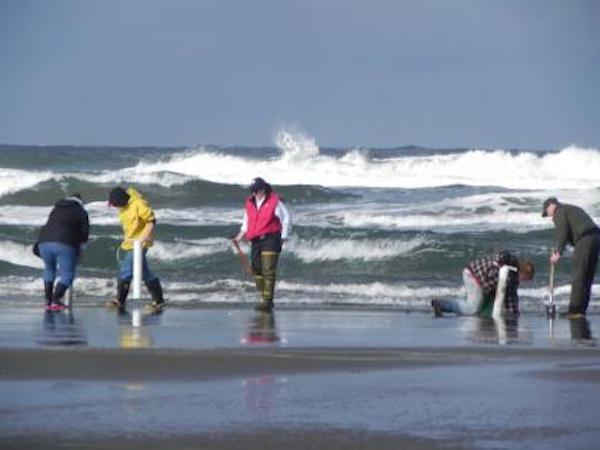 The Pacific razor clam is one of the most sought after shellfish in the state of Washington. Better roads and more leisure time have brought increasing numbers of diggers to the ocean beaches. It is not unusual to have as many as a thousand people per mile during a nice spring weekend day.

Recreational digging for razor clams can be enjoyed by children and senior citizens alike. All you need is a clam shovel or specialized tube, a container to put your clams in and, most importantly, your clam license. Be sure to check the regulations for the latest clam-digging requirements and other sport fishing regulation updates. During the fall and winter when low tides occur at night, thousands of clam diggers brave the elements to dig by lantern or flash light. Because there is a great deal of interest in digging at all times of the year, seasons are set to allow digging during daylight spring tides when there is better weather and during the fall/winter when diggers have to deal with the elements, but not as many clam diggers.

During certain times of the year, marine toxins, produced by some species of diatoms (algae) are taken in by razor clams and concentrated. When ingested, these toxins can cause illness and in very high concentrations can be fatal to humans. WDFW, in cooperation with the Washington Department of Health (DOH), samples clams on a routine basis to determine up-to-date toxin levels. If high toxin levels are detected, clam seasons are delayed or closed. WDFW and DOH work very hard to provide a safe and fun resource to enjoy.

OLYMPIA – Razor clam diggers can return to various ocean beaches for a three-day opening beginning Saturday, April 20 and extending through Earth Day, April 22.
State shellfish managers with the Washington Department of Fish and Wildlife (WDFW) approved the dig on morning low tides after marine toxin tests showed the clams are safe to eat.

“This is a weekend opening that should not be missed,” said Dan Ayres, WDFW coastal shellfish manager. “The Long Beach Razor Clam festival on Saturday, features clam digging and chowder contests, clam digging lessons, and live music – even pirates and mermaids making an occasional appearance.”

As in past years, WDFW is asking beachgoers to take care to avoid nesting snowy plovers.

“With barely 100 of these birds still surviving on the Southwest Washington Coast, it is vitally important for beachgoers to stay out of posted areas,” said Ayres. “Snowy plover nests are nearly invisible, so we want people to give these birds the space they need to live and thrive during their nesting period, especially near Midway Beach and while walking towards the north end of Long Beach.”

Ayres recommends people avoid leaving leftover food or trash on the beach--which attracts predators--avoid the dunes as much as possible, and heed the 25-mile per hour speed limit if driving on the beach.

Diggers should hit the beach about an hour or two before low tide for the best results.

All diggers age 15 or older must have an applicable 2019-20 fishing license to harvest razor clams on any beach; 2018-19 licenses are no longer valid for this dig. Licenses, ranging from a three-day razor clam license (starting at $9.70) to an annual combination fishing license, are available on WDFW's website at https://fishhunt.dfw.wa.gov and from license vendors around the state.

Under state law, diggers at open beaches can take 15 razor clams per day and are required to keep the first 15 they dig. Each digger's clams must be kept in a separate container.

Ayres noted that based on the remaining number of clams to harvest, this is very likely the last razor clam dig of the season at Long Beach and Copalis beaches.

The Washington Department of Health (DOH) monitors shellfish for a variety of contaminants, including biotoxins, pollution, and radiation. For more information on shellfish safety, visit DOH's recreational shellfish webpage.

Razor clams are found primarily on the intertidal coastal beaches (those that are exposed at low tide) from a +3 foot level to a -2 foot tide level. The Washington Department of Fish and Wildlife (WDFW) divides the harvest areas into five major management zones (see map):

Be sure to check the latest domoic acid levels at these beaches before heading out. 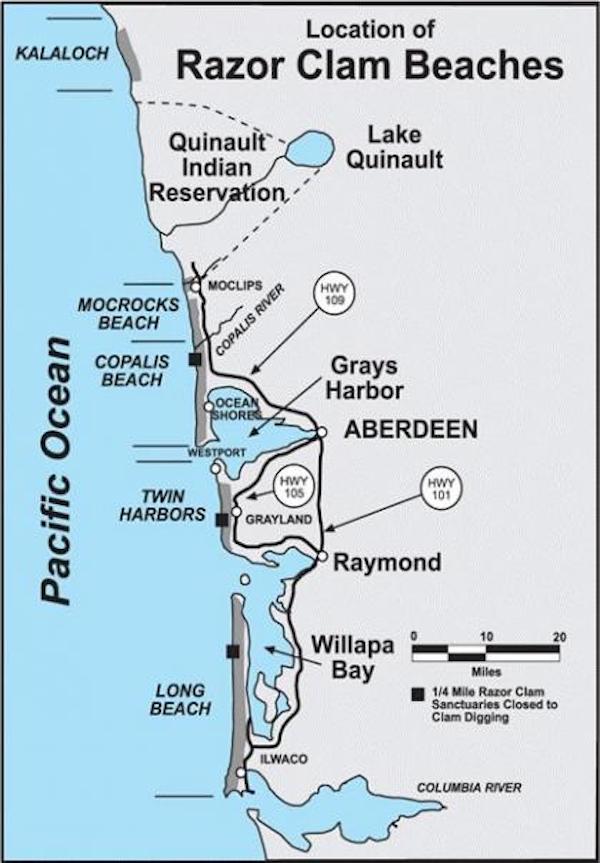